What Is It Trying to Get Us to Do? 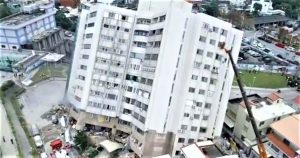 It took me many years to slowly crack Chapter 16, Section 1613 of the International Building Code along with its reference standard ASCE-7 Minimum Design Loads for Buildings and Other Structures. In 2000, New York State adopted the International Building Code (IBC) as its model building code, and along with this adoption came seismic design. Before this, New York State did not require buildings to be designed to resist seismic forces.  The old New York State Building Code required lateral design for wind loads only. This procedure was often quite simple too as the designer selected the required wind pressures from a table that was based only on building height. Not only in New York State but in most of the Northeast, the introduction of seismic design and how to design for a set of seismic forces were new to many engineers. Also, the seismic design procedures were much more involved than simply pulling pressures from a table. Now engineers had to determine such things as a site class, seismic design category, and site ground motions. Determining the site class would even require the assistance of a geotechnical engineer.

Seismic forces are unique in that that they are applied from the ground up, and you cannot see them or touch them. Moreover, they form inside of the structure as opposed to being applied from the outside. As the ground suddenly moves, the building snaps back to catch up with it. This generates inertia forces because each particle of mass is accelerated through some distance. Generally, the shorter and stiffer the building, the higher these inertia forces will be because the ground accelerations are amplified by the structure’s stiffness. Often these forces are so high, it becomes impractical to design for them while allowing the building’s lateral force resisting system to remain elastic. Doing so would result in the design of very large heavy members and that would probably not be economical at all. So how does the Code get us around this dilemma?  It forces us to build ductility into our designs.  Carmakers have been doing this for years. Although most cars and their drivers will never be in a serious accident, a small risk always exists. However, automakers don’t design cars to be repairable after a serious crash because it would result in massive car frames that were impractical to drive and unaffordable for most. 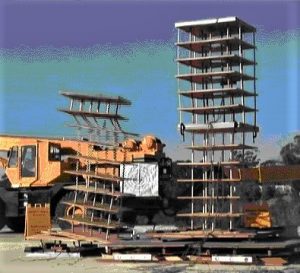 What do carmakers do instead? They design ductility into the car frame to absorb massive amounts of energy from the impact and protect the driver while essentially sacrificing the car. This is done by including fuse points located at specific areas in the car frame to yield and absorb energy. One hopes that this design approach allows the driver to walk away from the crash with minor injuries, even though the car is a total loss. The same concept applies to building design: Building Collapse Prevention protects the occupant while sacrificing the building. Although most structures will never be subjected to the earthquake ground motion as set forth by the Code, they must be designed and detailed with adequate ductility to remain standing if they are. Essentially, we want the structure to yield and bend but not break. This is counterintuitive to most structural engineering design; nevertheless, it is essential in seismic design.

Ductility can be built into the design with the selection of a ductile building material such as structural steel or reinforced concrete, along with a ductile lateral force resisting systems such as intermediate moment frames.

The Code gives each system a response modification number R. The higher R is the more ductile the system is. The lower the number is the less ductile. Very ductile systems usually have many Code detailing requirements that must be met to take advantage of the higher R-value. Some materials such as steel are inherently ductile. We, as the designers, just need to take advantage of it and not mess it up! Other materials such as concrete and masonry are brittle but can have ductility greatly improved when used in conjunction with steel reinforcing bars.

Regularly shaped building footprints, direct lateral load paths, and redundant lateral load paths are also critical for a structure to perform as the Code intends during a seismic event. For example, irregularly shaped building footprints often include reentrant corners which unintentionally attract inelastic behavior and concentrated damage to those areas of the structure. 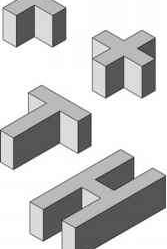 Discontinuous braces can result in large overturning axial force demands on the columns below. The Code punishes the designer for these things by listing a series of horizontal and vertical irregularities that should be avoided. If they cannot be avoided, the designer is often forced to increase the seismic design forces or use more intensive analysis techniques. This is also the Code’s way of saying that some seismic design procedures have been overly simplified into a quasi-static approach (such as the equivalent lateral fore procedure, ELFP) that can be used for most of the typical structures we design. However, if your structure deviates from any of the assumptions used in the ELFP approach, you will be punished. This can include any kind of horizontal or vertical irregularities, along with non-uniform mass distribution or changes in lateral stiffness over the height of the structure. These irregularities drastically change the assumed idealized seismic response of the structure and can result in poor seismic performance of the structure too.

Therefore, much of the International Building Code Section 1613 (as well as ASCE-7, AISC-360, AISC-341, and ACI 318) tries to get us to think about ductility, regularity, and direct lateral load paths. These items are critical for good seismic performance and ensure a collapse prevention level of safety for the structure. The designer must keep this in mind when designing a structure to resist seismic forces. This may include difficult discussions with the architect early on to provide seismic joints in the building that break an irregularly-shaped building footprint into two regular shapes, or selecting a lateral system with higher response modification factor, even though it requires more detailing effort on the part of the designer and steel fabricator too. Whatever the case may be, this is what the International Building Code, along with ASCE-7, wants us to consider and implement into our designs.

Justin Pechar, P.E., S.E., is the Director of Structural Engineering for Hyman Hayes Associates. With over 20 years of experience in the field of structural engineering, Justin has expertise in the design and detailing of steel and masonry buildings, forensic structural investigation, and troubleshooting existing structures. He has diverse project experience including work in healthcare, higher ed, K-12, technology, and municipal projects. Justin is passionate about promoting the field of structural engineering and the innovation thereof, through practice, mentoring, and presentation opportunities.